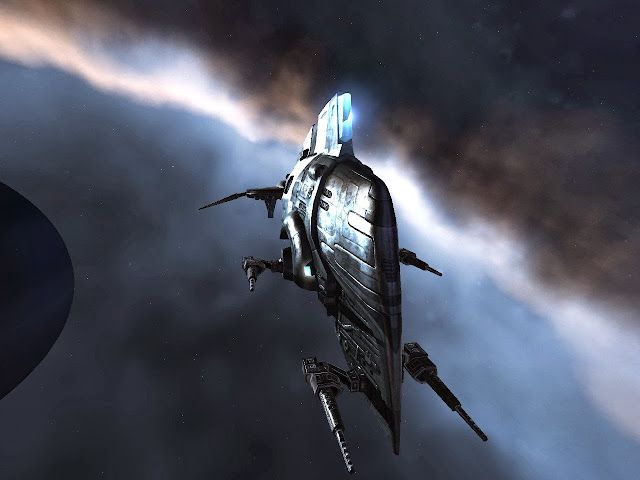 I love the Federation Navy Comet.  It’s a supremely versatile, fast, good-looking (just bloody look at it) Tech II frigate, with three excellent and entirely viable fits:  a 350 DPS brawler, a 240 DPS scramkite and a 150 DPS WD kite.  There are probably dozens more viable fits I’ve overlooked, such is the adaptability and brilliance of the Navy Comet.  Your opponents will never really know what fit you’re flying until they face it.  You can’t second guess it.  Although if you find me flying it, I'll narrow the odds for you - it will be one of these fits.

The only downsides are the cost and the now-absent flashing blue police light on the front.  I miss that light.

I’ve not given specific tips on how to fly the Comet, although the general concepts are covered in other similar T1 frigate fits.  Let’s face it - if you’re dropping over 30m ISK on a frigate, then you should have a decent idea of what you’re doing by this point.

That’s it, really.  Launch your drones, overheat your guns (they last ages) and throw it at the enemy.

For fleet engagements, where an MWD is often preferable, replace the Afterburner II with a Limited 1MN Microwarpdrive, and meta down the DCII to a Pseudoelectron Containment Field I.  This drops your EHP by 270 odd, but gives you an impressive 3,459m/s headline speed instead – with the headline 349 DPS intact.

There's dozens of different flavours of scramkite comet operating at around 7k - some with more tank and 125s (EAMNII / Micro Aux Power Core / 400mm Tungsten plate in the lows) or 150s (EANMII and Explosive Plating), or 125's and nos etc.

Indeed, I've tinkered and changed my mind a number of times about this fit, but now settled on this as the optimum combination of gank and tank.

This Comet fit is a pumped up version of the classic Incursus 7k scramkite.  The ‘angry Incursus' fit is better in just about every way that matters – it’s got more naked EHP, it does more DPS, it is 180 m/s or so quicker and it lasts a lot longer.

In fact the only thing not better about the Comet is the cost.  These improvements – which I’d argue are substantive, not incremental, giving you a real edge – cost you a lot more than the Incursus fit.

Whether the additional kills you would hope to glean from it represent ISK efficiency is down to pilot skill more than anything else, but it never hurts to have the best tools for the job.  This is probably the best 7k scramkite that fits into a Novice plex.

Most of the time you want to be keeping at range around 7.5 - 8km. Overheat your guns and scram. If anything with tracking disruptors fancies a go, load Plutonium. If a kite manages to wriggle free, switch to Uranium - or ideally avoid them altogether.

Spare mags of Federation Navy Antimatter S in case you get caught.

This is an epic kite fit.  It really is.  With only two slots needed for the MWD and WDII, you’ve one spare to fit the Medium Shield Extender II.  What you end up with is a very fast, very agile, high EHP superkite with reasonable DPS and a long cap time.

Set your Keep at Range and Orbit to 18,250ms and you’re all ready to go.  Overheat your guns from the start, and, if required, heat the WDII to keep naughty slingshotters in reach with the extra 4km range.

This fit trades tank for DPS, and with the guns heated delivers 217 DPS at an optimal range of 17.5km.  You may find this more aggressive approach works better.  It will certainly shred any AB fit frigates it grabs, even if they kill your drones.  And against other kites, you don’t have to worry so much about your own tank as your DPS will prevail.  A solid fit, and not too expensive either.