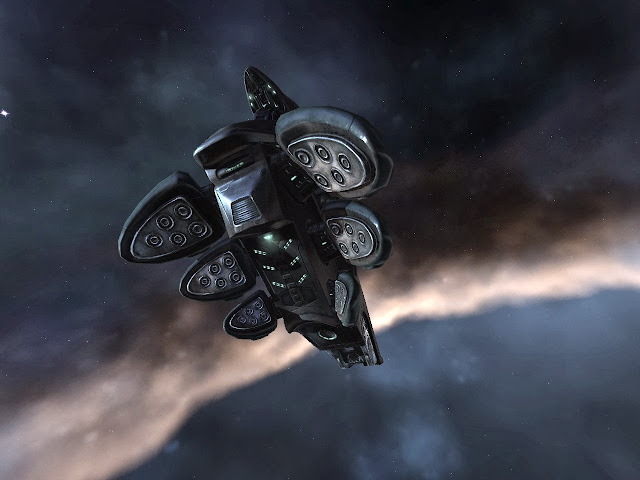 Without any shadow of a doubt, the Maulus is the dark horse of the Gallente frigate lineup.  Most pilots overlook it, because it can’t fit a substantive tank, or deliver major DPS, and its bonuses – 7.5% to Remote Sensor Dampener effectiveness / 10% reduction to Remote Sensor Dampeners’ capacitor need – don’t look pew-centric enough.  It’s all a bit, well, complicated.

But underestimate the Maulus at your peril.  It is an absolutely superb solo / fleet e-war frigate. If anything, it’s probably a little overpowered – but who are we to complain?  Like all ships, it tends to work best when you fit it to take advantage of its bonuses.  Like a bank holiday mini-break to the Lake District destroyed by the British weather, it just loves to get damp.

Here are some fits to get the ball rolling, then.  These are probably not the absolute last word in EFT-warrior tinkering opti-mentalism, but in practice – on the battlefield – they do work and are fun to fly.

This is a superb and immensely satisfying solo plexing ship for the money – kind of the Gallente equivalent of the annoying Caldari Navy Hookbill, but for a lot less cash.  It is also pretty rare – you hardly ever see these in solo PvP, so enemy pilots don’t really know what to expect.  The lowish EHP is a worry, but with careful piloting you can damp down and see off the majority of your opponents, and especially any Tech 1 Frigates.

It doesn’t have quite the fitting to get 125mm Railgun IIs on, but the Proto’s bring reasonable DPS to the table for the two slots you’ve got available for guns.

With anything less than all skills at V, your biggest operating issue is going to be cap.  With a highly skilled character, you’ll be cap stable, but if you’re getting 50 seconds plus cap time, that’s still going to be enough to see off most opponents.

It has a ton of modules to activate, so your fingers will be whizzing over the F keys like a concert pianist performing a Rimsy-Korsakov concerto piece.  But that’s all part of the fun.

How to fly it
Now onto the options for gang / fleet engagement fittings….

This is an amazing e-war frigate fit, make no mistake.  Long range, treble damps, plus drones.  What’s not to like?  OK – apart from the cost?

The Type-D's are a little cheaper than Sensor Booster IIs, and although they have fractionally less scan resolution bonus do pretty much the same job with less CPU and don't require Electronics Upgrades V.

Generally speaking, I prefer to fly this with Hobgoblin IIs to contribute a bit of DPS on the battlefield.  However, if you prefer to go full-on e-war with your fit, then by all means fit the Hobgoblin SD-300’s, which give a targeting range bonus of -8% each.  I have no idea whether this bonus ‘stacks’ across a flight of drones – so a flight of four, on one enemy, gives a cumulative dampening effect of 40%.  I suspect it does.  Nor do I know how it interacts / stacks with the sensor disruptors and rigs on your ship.

Even though it’s long range, it requires a lot of pilot skill and concentration to operate effectively.  Again, this probably isn’t the last word in how it should be deployed, but give this a go.

This works nothing like a combat ship.  Your job is not really to DPS the primary, but to target logistics, other ewar and kites, probably in that order. Your FC will be barking primary / secondary / tertiary orders down the headset.  Ignore those.  Your job is different.  And a bit complicated, but bear with me…
Now the good news.  By spreading your targets, damps and drones, you get on a lot of fleet killmails.  Damps do count towards ‘damage’.  It’s not killmail whoring.  Oh no. It’s 'playing an active and important role in the fleet, for which you deserve to be fairly acknowledged for your skills and efforts in the publicly available records'.  That's the line to take, if asked.

If juggling all those targets and mods is a bit much, here’s a brace of simpler options…

Cautious?  Like to stay at the back of the battlefield and pick off the enemy?  Like sniping?  Scared of being shot?

The Optimaulus is the frigate fit for you, then.  Using drones, this boasts an incredible optimal range of 129km.  That’s right – you can lock targets, and fire / control drones out to 129km.  Because this fit is cap stable, you can keep the MWD running continuously.

What’s more, the Optimaulus also does reasonable drone damage at 117DPS with Hobgoblin IIs.  Although the catch – and there always is a catch with these extreme fits – is that even at 120km or so from your target, a flight of four Hobgoblin IIs travels at 4,200m/s.  That’s about 30 seconds from ordering them into the fray at 120km to them arriving and actually engaging the enemy.

You can cut down your travel time by using Warrior II drones, travelling at 6,300 m/s, but that’s still 20 seconds or so before they arrive, and the Warriors slice down your DPS to 95.  Personally I stick with the Hobgoblin IIs.  Once they’re amongst the enemy fleet, they stay there, flitting from target to target while you relax half-way across the grid.

How to fly it
If you want to play around with this fit, there’s an economy model that delivers fractionally lower range and DPS for about half the price…

This fit has a singular purpose:  to catch and kill plex farmers in lame mult-stabilized frigates.

Anyone who spends time in Faction Warfare will come across them in droves – newly created alt pilots sitting, defensively plexing in lamefit T1 frigates, frequently kitted out with multiple Warp Core Stabilizers.  You warp in, and sometimes they have already warped off.  Or you warp in, try to grab them with your Warp Disruptor or Scram, and again they warp off  - they were fitted with stabs.

Here’s where the Backstabber helps.  Fitted with three Warp Scramblers, it can grab and hold anything equipped with even a rack of four stabs in the low slots.  Then you can kill it.  Speed is of the essence, hence the proliferation of drive and agility mods.

It works best against defensive plexers, as enemy pilots offensive plexing may well have a very capable combat fit that can overpower this Maulus.  So ideal hunting grounds are systems controlled by the enemy, usually the quieter, out of the way systems.

How To Fly It

Enter the system.  If there’s one or two novice or small plexes open and a similar number of enemy war targets in system, then scan the plexes from afar and see what’s inside.  You’re looking for T1 frigates.  Then have a look at the characters in system.  Are they fairly new?  Not in a corp?  Perfect.

The next thing to do is to wait for a bit.  Don’t rush in, because the chances are that they’ll be watching local and will have noticed you.  If there’s unopened plexes available, pop one to give the impression that you’re also plexing (you can Warp To the gate and then quickly cancel the warp to remain where you are).

Make sure your mods are assigned to F keys and you have your fingers on the main mod keys – the MWD and the three webs.  Set Keep At Range to about 3-4km.  Pre heat your guns, the scramblers and your MWD.  Pre-load your MWD.  Then pounce.  You need to get to the plex gate and get inside the plex as quickly as possible, so warp to it at 10 and spam activate gate as quickly as possible when you land.

As you are warping to the plex, this is what you do in this order:

Now – assuming that you haven’t inadvertently caught something that’s combat ready, it should just be a matter of chewing through the farmer’s ship.  Try also to catch and kill the pod.  That’ll teach them.  Filthy plex farmers.