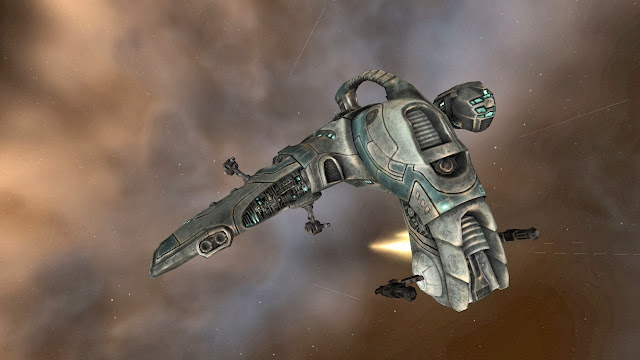 That’s it.  That’s the fit.  No mods or guns or anything.  Just the empty ship itself.

That’s all you need to get involved in Factional Warfare – a basic T1 frigate, unfitted.  Join Eve Online, sub your account, bail on the tutorials, ditch the Velator, learn Spaceship Command 1 and Gallente Frigate 1, get to a Federal Defense Union station like Villore or Orvolle, sign up to the Gallente Militia, and start defensive plexing and earning loyalty points

In all seriousness, I would strongly recommend that any totally new player to Eve online does go through the tutorials – particularly as you get a bunch of cash, skillbooks, ships and useful experience in the basics of the game.

But an empty frigate (I’ve chosen the Incursus here because psychologically any would-be opponents will be slightly – slightly – more anxious about it than an Atron) is enough to go defensive plexing, and start earning LPs which you can turn into cash.  For a noob, with no skills, it’s a highly profitable way to earn decent cash at the beginning of the game.

Skills after 24 hours of training:

I’ve spent some time pondering what is the quickest way to get into a half-decent, moderately priced ship that can defeat the NPC frigate or destroyer in the enemy plexes.  So this is it.  The Noobtron.

A starter Gallente character can train and fly this in under 24 hours.  This is what you need to train to fly it:

Now - don’t go getting overambitious.  It’s going to get beaten, a lot, by better skilled, better equipped pilots in faction warfare.  But you may come across a low-skill farmer who can be dispatched, assuming they’re not stabbed.  And there’s nothing to say you can’t take this out in a ‘what have you’ free-for-all frigate roam.  Your skills will be growing onwards and upwards, anyway - it's a temporary fit on the journey to better things.


All the skills you train for this will stand you in good stead for moving up in class to other frigates, including this:

This is a ship you can grow with, promoting it through the meta-levels of modules until you’re fully Tech 2 fitted.  It’s a close range brawler, so in a plex you need to catch your opponent as soon as they warp in.

Yes - the SAAR is expensive and doubles the price of the fit, so if money is tight, use the normal Small Armor Repairer II instead.

This fits with all relevant skills at level 3, and is just enough to give you a taste for proper Warp Disruptor kiting.  The Atron is pretty fast, which really helps this kiting setup work.

Try to target only Afterburner frigates – ideally those fitted with blasters , short range rockets or other slow, slender-distanced weapons.  You have a paper thin tank on this, so you definitely don’t want to get caught by web / scram ships as you will get eviscerated quite quickly.

It is also cap stable, which is just as well as this ship only does 43 DPS.  It is going to take a loooooong time to finish someone off in this.  But against the right opponent, it does work.


Don’t worry if you have to run – lots of kite 1v1 PvP fights end this way, with one or the other opponent bailing.