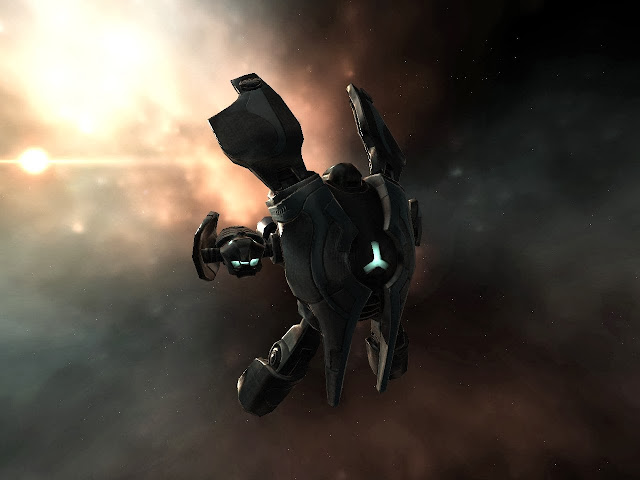 This is a good solid brawler, and can be meta'd down for lower skills / cheaper budgets.  The headline stat is the 8k+ EHP, meaning you can deploy it in the middle of a frigate fleet battle, or solo, right on the button in a plex. With the mixture of drone damage and - for a brawler - decent range with the Gatlings, it can tough out most engagements.

Of the Tech 1 Gallente frigate brawlers, it's closest rival is probably the dual-rep Incursus, or even the classic 7k scramkite Incursus.  Both of these outdamage the Tank Tristan, but neither have the passive core tank EHP it boasts.

But this is a slow ship.  If you can't get the web / scram on, you are then reliant on your tank and the drones doing their thing.  Sometimes this works against kites, sometimes they outrun or shoot your drones and it doesn't.  It is worth carry a few mags of Spike S to switch into, which gives the Gatlings an optimal of 16.2km.  It's better than nothing.

There are alternative fits using 150mm Autocannons which might also bear investigation, although why you'd want to dilute the purity of your Gallente boat with Minmitar guns is another question.

For a far larger Tristan engagement profile, however, look no further than the legendary....

That’s right – it doesn’t have any guns at all.  You won’t need them.  Although he might not have been the first to arrive at this fitting, it can be seen regularly slaughtering innocent plexers across the Gallente / Caldari warzone in the hands of low-sec pirate Commandante Chongo.  Once I’d been completely owned by this in an afterburner fitted Ishkur, I had to check the fit out.  It’s a masterpiece.

It also has a pretty wide engagement profile – afterburner ships are particularly prone to it, but it can take down a decent portfolio of frigate kites, destroyers and all sorts of stuff.  You can defend novice and even small plexes with it.  You can attack plexes with it, bursting in with the MWD overheated until you get to range.

Now, I know full well that having drones as your only source of DPS might seem, on the face of it, like a really bad idea.  They can get shot, after all.  But the reality is that in most cases – like maybe 4 out of every 5 fights – that’s not actually what happens.  Opponents don’t seem to target drones as frequently as you might expect.  Plus the drones are getting to work quickly, flying in at 4,000m/s plus and delivering damage.

Orbitting at 3,300m/s takes the edge off a lot of damage, too.  Without guns, you also aren’t needing to worry about your own turret range or tracking.

Being shield tanked, the Chongo Tristan also confers a moderate psychological advantage as your opponent realises your shields aren’t going down quite as quickly as they’d hoped.

How to fly it:

It’s generally pretty simple:  orbit your opponent with the MWD on, put the warp disruptor on, set your drones to work.    The WDII has a range of 24km, so there’s plenty of ‘buffer’, and you’re quite fast anyway.  However, there are some tactics that are useful, with acknowledgement to Commandante Chongo who was kind enough to provide an insight into how he flies his Tristan fit:

This fit is ideal for solo work in plexes, but the nature of drones means that they are skill intensive – to really get the most out of it, you need all the key drone skills to V.

But that's not all.  If you have really good skills - and by that I mean deeply into Advanced Weapons Upgrades and Shield Upgrades to V, then this fit has another party trick.

Meta down the shield extender to a Medium F-S9 Regolith Shield Induction, and you can fit a pair of 75mm Gatling Rail IIs on. In doing so, the only ammo that really works at long point range (17k or longer) is Spike S, so the tracking isn't fantastic, but it adds another 27 DPS, or 31 DPS with heat, bringing your total DPS to 173 at the expense of 400 EHP.  This is a reasonable tradeoff, particularly as you can also pack some Federation Navy Antimatter S should you get webbed / scrammed, allowing you to brawl at 192 DPS up close.

There are some other variations on the Chongo Tristan theme...

This version - favoured by regular Gallente Militia Tristan pilot Ant Ant - trades shield for speed and agility by swapping out two of the Small Core Defense Field Extender I for two Small Polycarbon Engine Housing I.  It’s a small, subtle and context-specific variation, dropping EHP for increased ability to hold range and keep the Warp Disruptor II point on.

This is a cheaper, lower-skill-intensive version of the Chongo Tristan, fitted with Tech 1 components.

This means the optimal orbit range of the DerpChongo is 15-16km, not 18km.  Against a slower AB / web / scram ship, you should still win, although you have to be really careful not to allow an overheated scram to reach you.  It will also give a moderate account of itself against Tech 1 fitted kites, but your objective really is to get the WDII on it as soon as possible, plus the extra damage afforded by the Hobgoblin IIs.

A million Fleet Commanders cried out in unison:  “Where’s the point on that ship?”   By ditching the long point entirely, this fit leaves you to do what it does best, scuttling around the battlefield, keeping at a comfortable 65-75km orbit from other frigates, with the MWD running permanently whilst firing out the drones.  It does decent DPS at range, has good EHP, is fast and is cap stable, so you can mince around attacking things at will whilst keeping out of trouble.  It's a little pricey, but you're well out of the danger zone with plenty of space to leg it if things go pear shaped

Just set your orbit and keep at distance to 65-70km, according to taste, and try not to get caught by fast scram / web frigates.  If something is burning towards you faster than 3,300m/s or so, overheat and keep at range.  Consider bailing if anything comes within 30km.

This isn’t really designed for poor skills. It’s designed to deliver a throwaway sniper ship that’s up there with the Talwars and Cormorants, for reasonable money.  It has range, speed, EHP (with the damage control) and no cap issues.  For larger fleets, these are great for sticking at range, flinging out the Hobgoblin II’s and getting on killmails.

It is, of course, possible to go longer range – or to add damps or disruption to the mix on a Tristan.  But that domain is owned completely by the Maulus for which ultra-long range or extreme damping is an artform.  But, for the sake of argument, let's indulge ourselves with an exercise in theorycrafting and see what's possible....

If you've got the skills for it, this Tristan fit can lock to 142.6km, and with the Warden II sentry drone can shoot to an incredible 162km - although its optimal is 132km or so.  In practice, about 120km is sufficient.  The DPS isn't anything to get a commemorative tattoo inked about - this fit is more for the laugh than the damage.  But you can have some fun on plex gates with it.

You really don't want to get caught, though.  This fit only works if you're in range and set up before the enemy lands at around or less than your optimal.  Align to a safe or a celestial before dropping the sentry.  You have no prop mod, and a very thin tank, so if anything gets within about 50km of you and closing, scoop the sentry and just warp off.